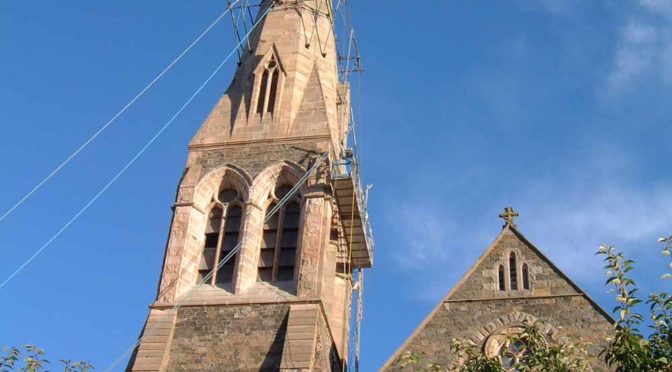 After a joint inspection by a structural engineer and ourselves, it was decided that the spire and steeple required a five phase contract to remedy the defects found.
These phases were:

This shot was taken on the spire. It shows some beds and joints that have been raked out and are ready for re-pointing. 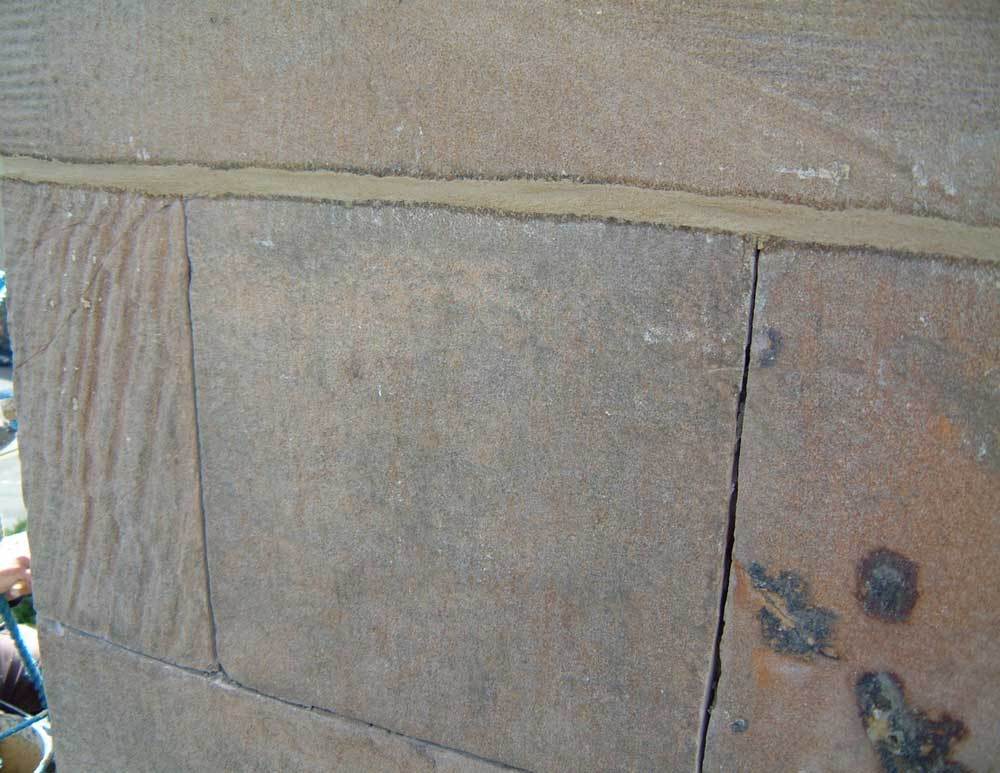 The mortar used was a mix of St. Astier NHL 5 and Dunhouse Sand (supplied by Masons Mortar, Edinburgh). 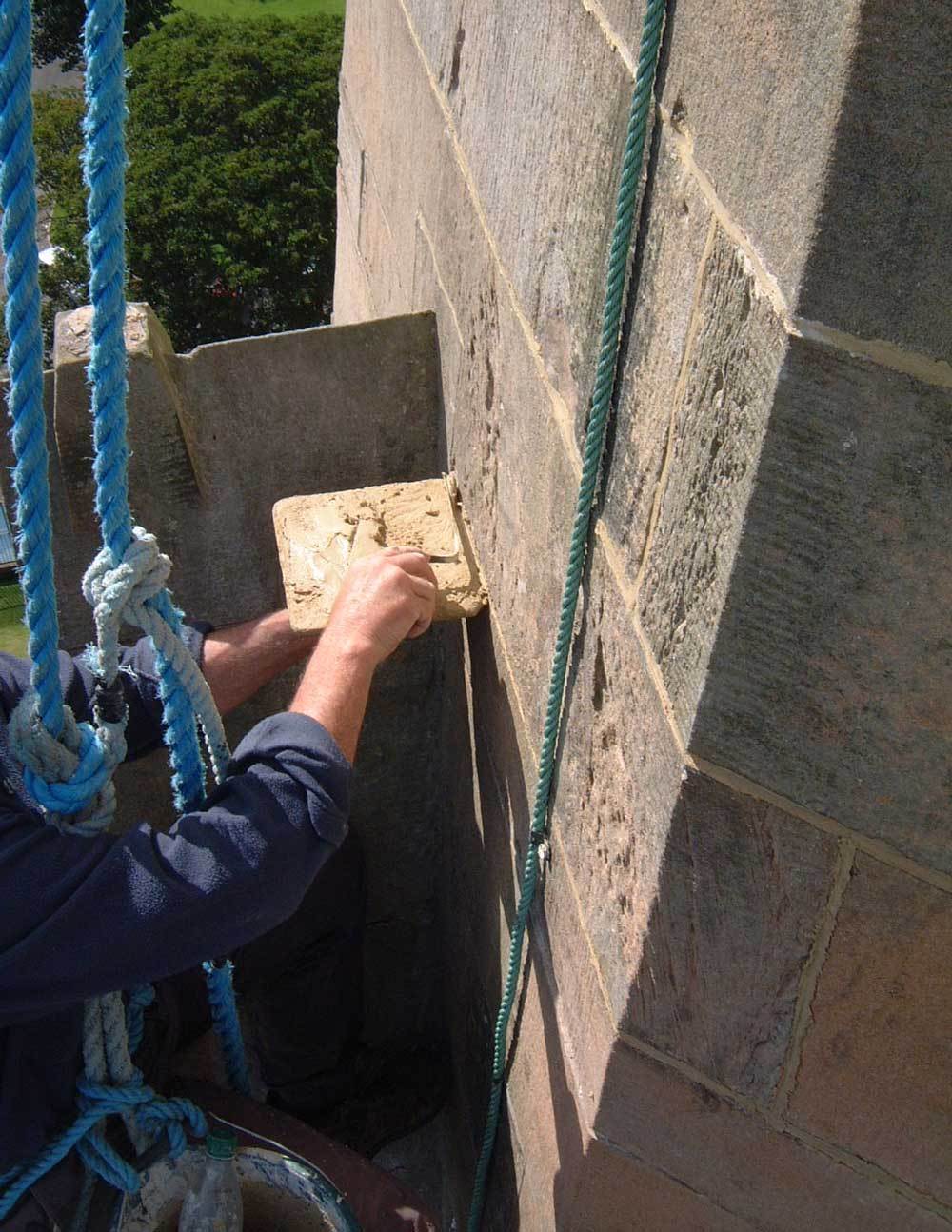 Looking up the newly pointed spire. 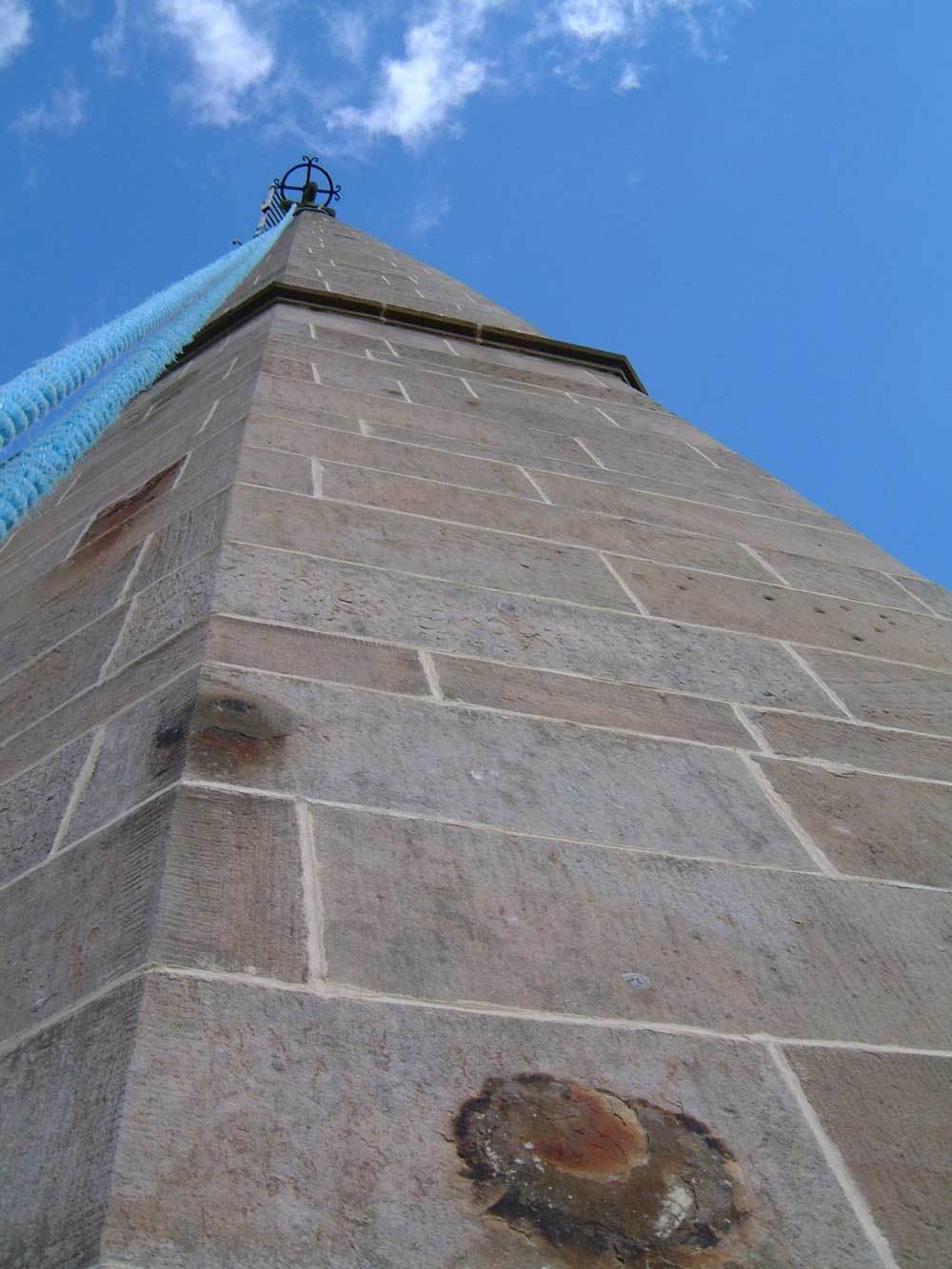 This picture shows one of the windows on the lower spire. The mullion in the centre of the window has just been built (no sub-contractors were used for this – the stone was cut and built by BCM Steeplejacks). It has been cramped and dowelled at the top and bottom.

You can also see a gap where one of the rybats has been removed in preparation for replacement. 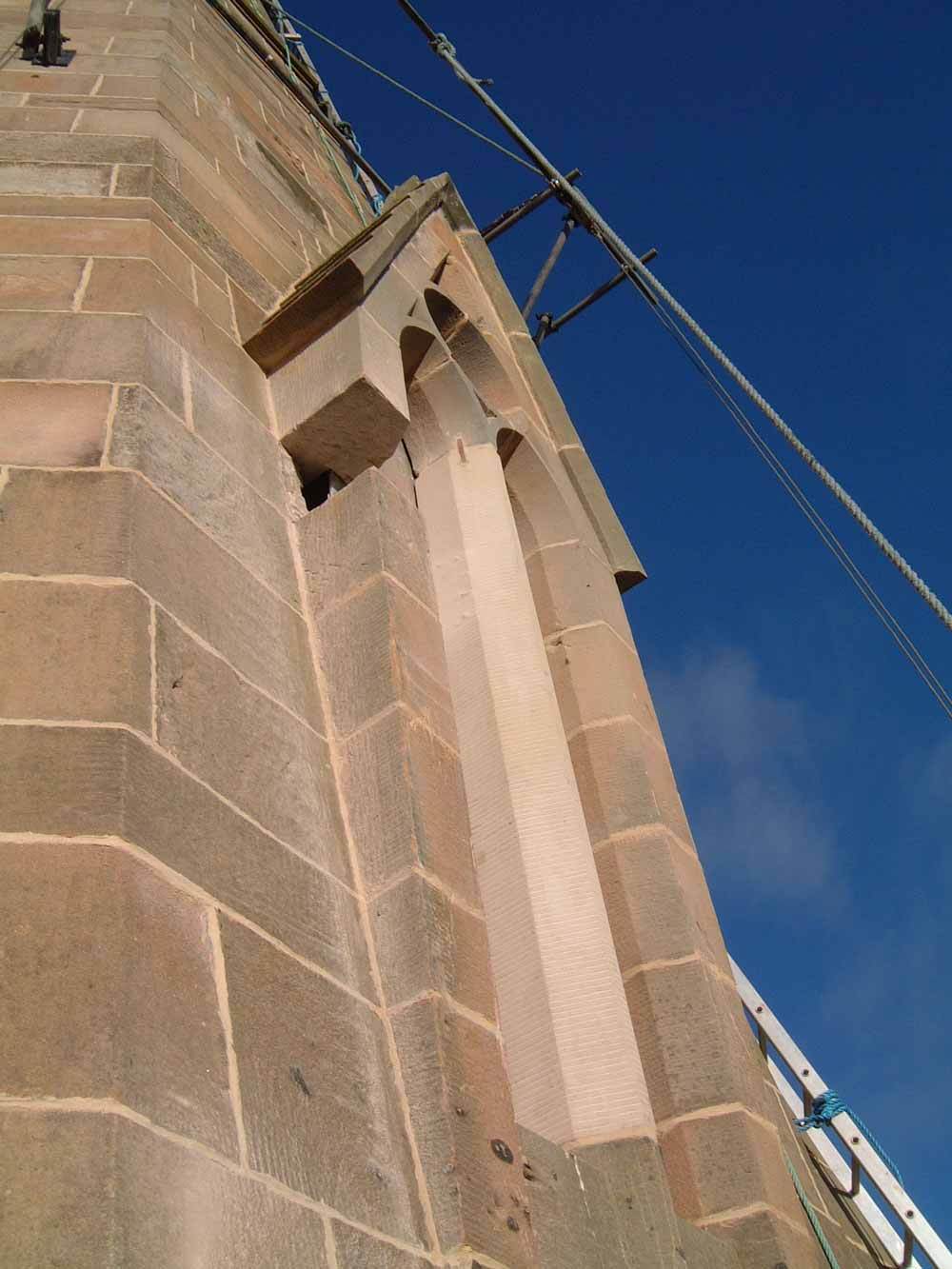 Tidying up the pointing after the mullion has been built. 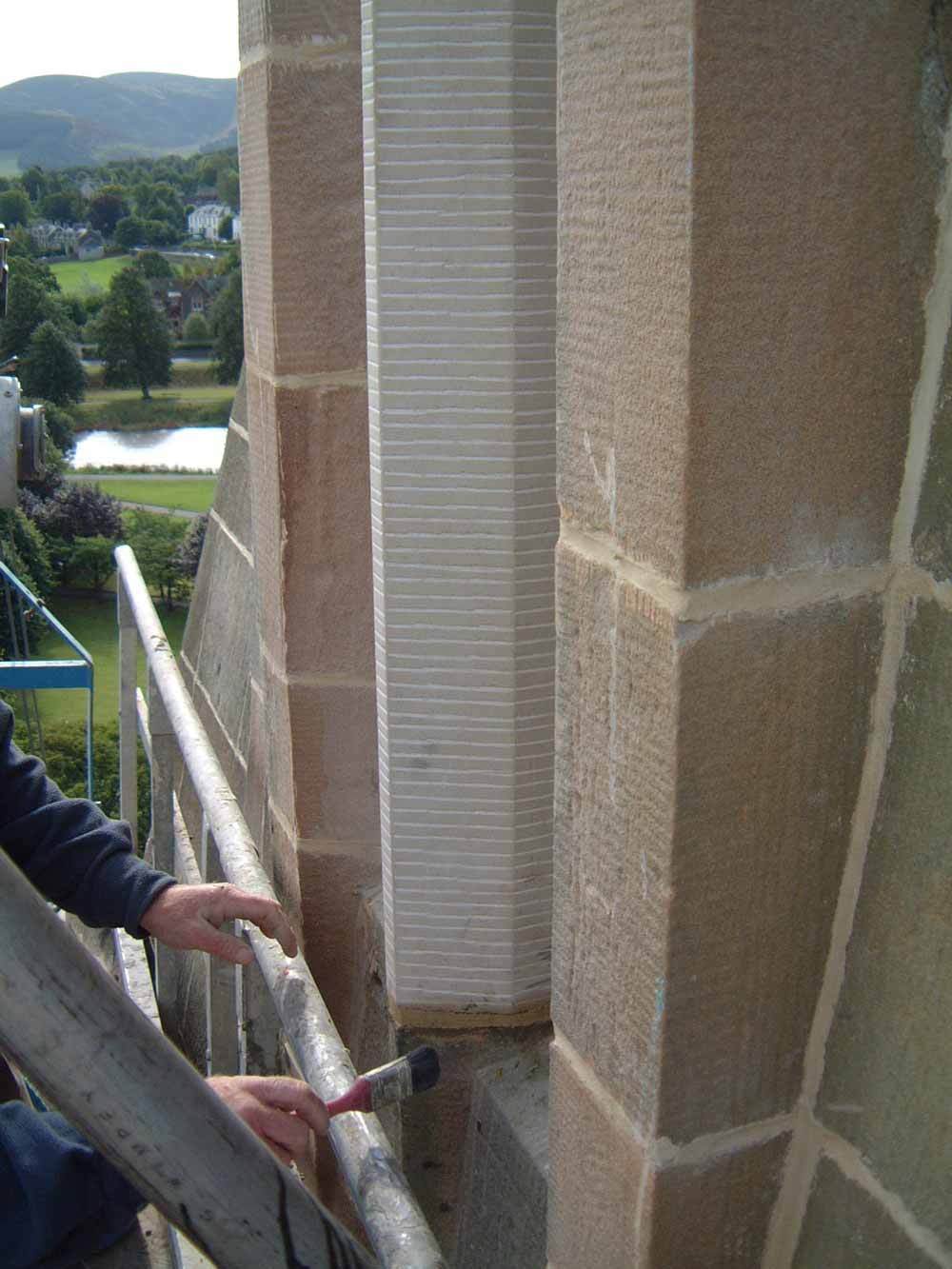 This picture shows one stone already cut and in place (not yet built). The pocket (with the hammer in it) is ready for indenting). 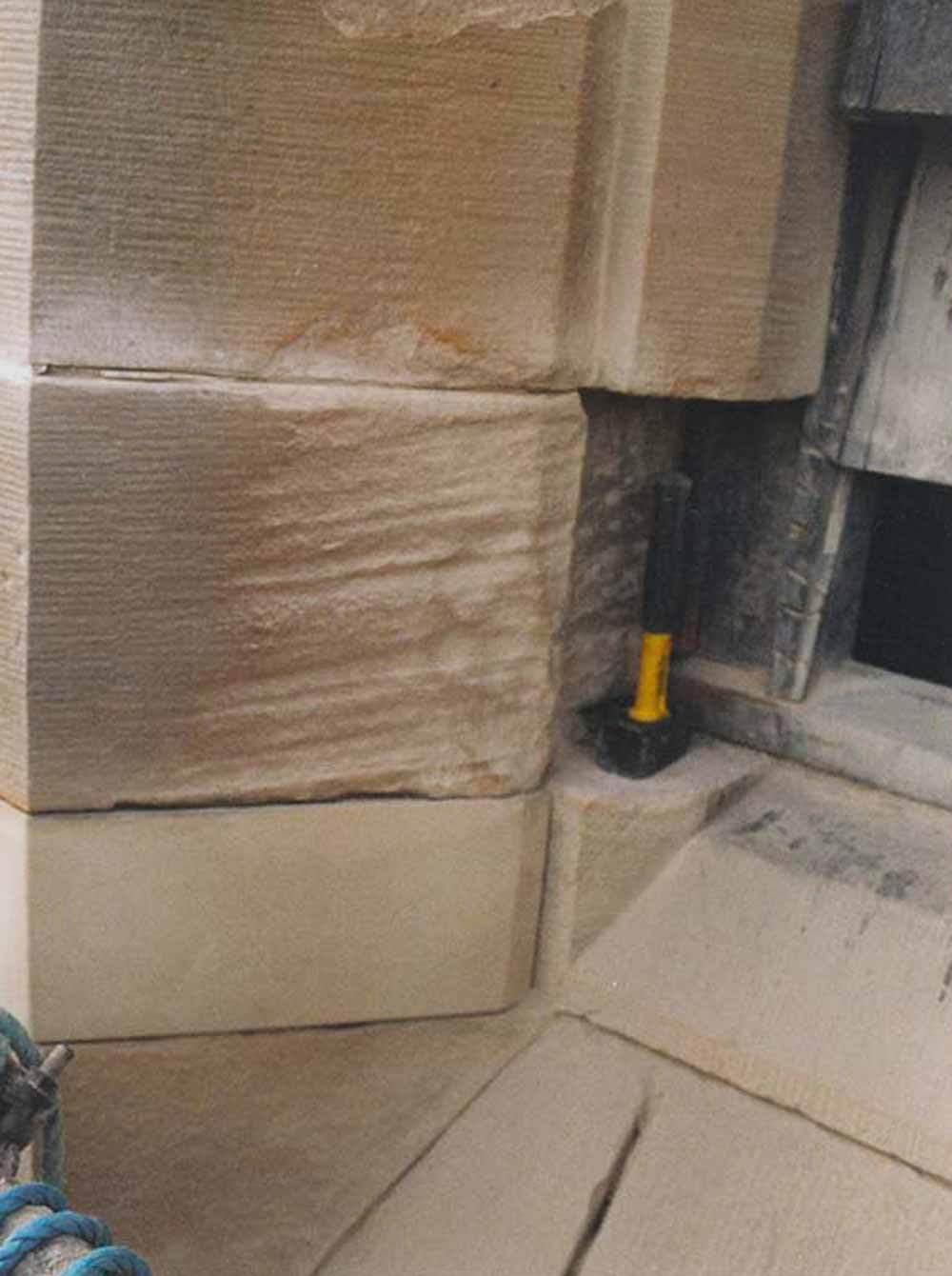 A similar but fully built stone, on another of the bell chamber windows. 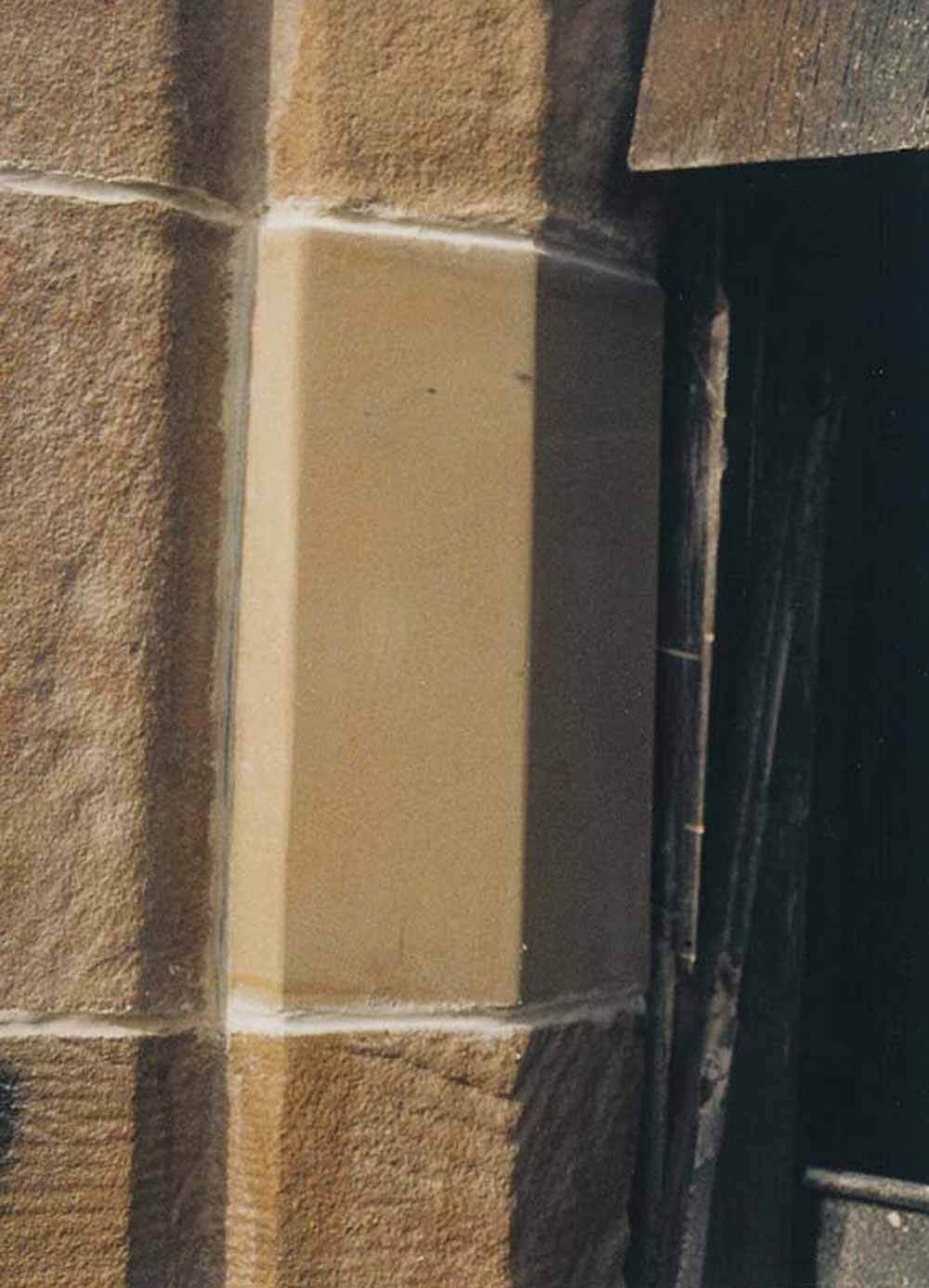 One of the upper windows with two stones removed. The stonework above the gap is supported on a jack until the new masonry is built. 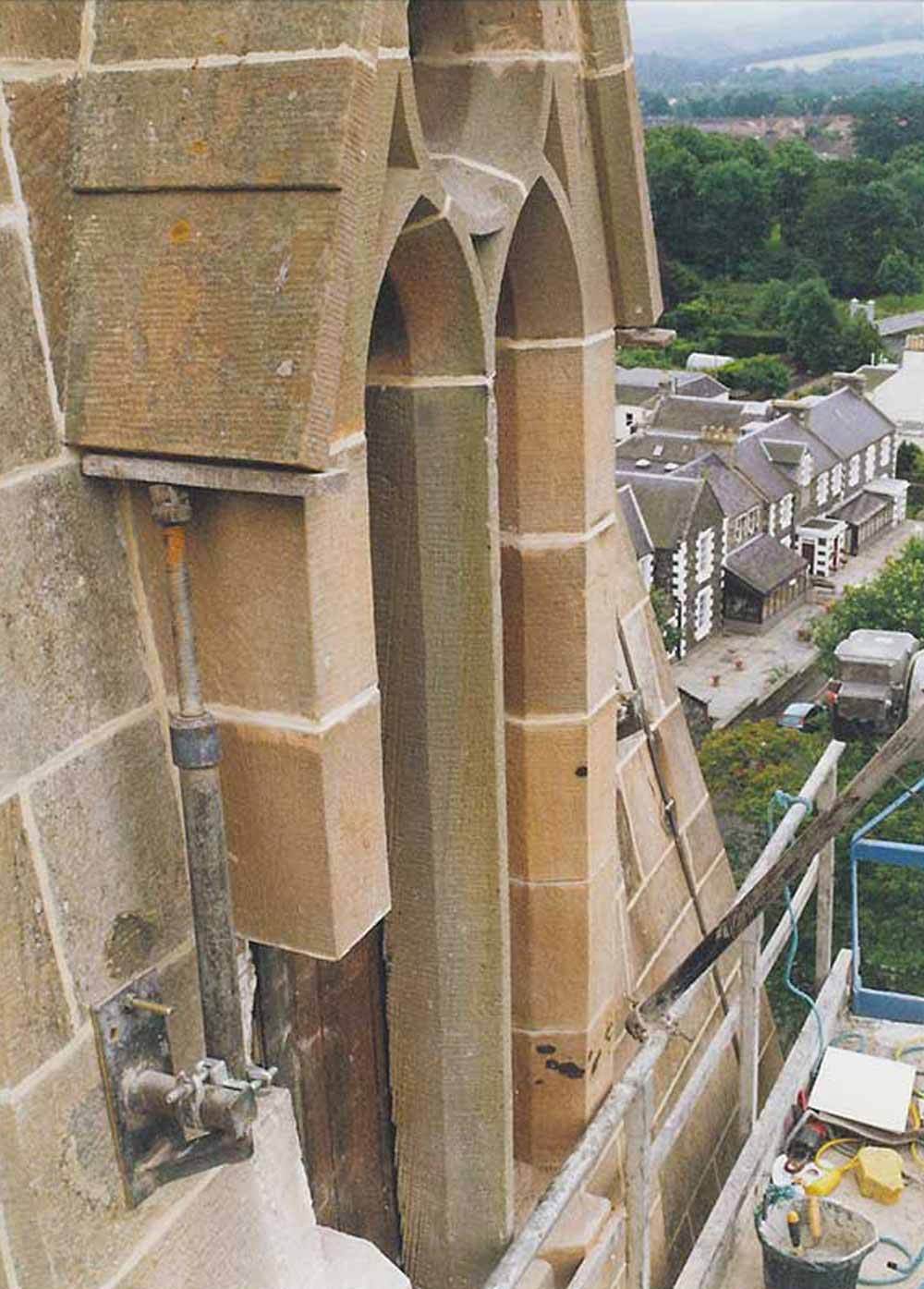 Another of the upper windows. 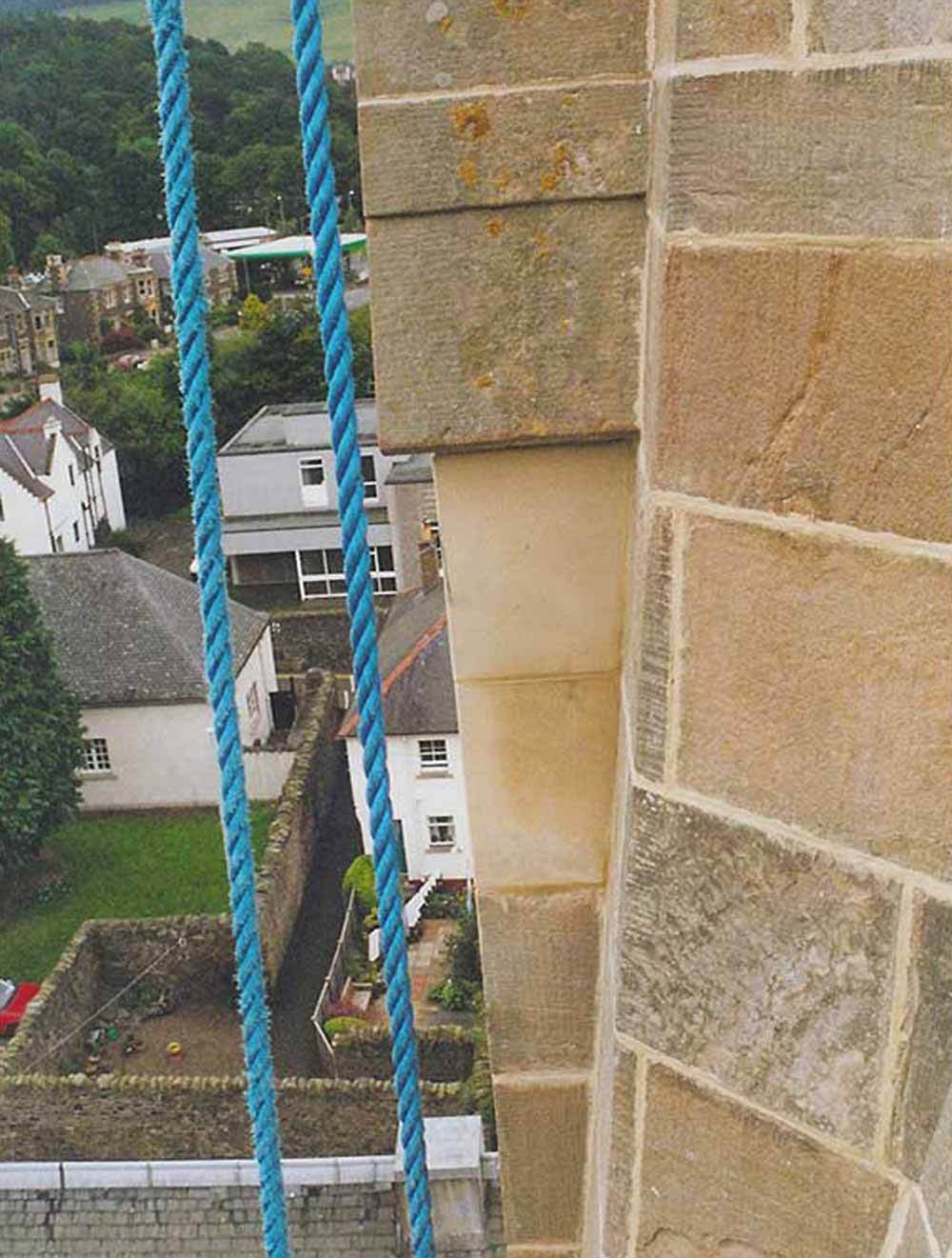 A view from the top of the spire showing the cradle.

All the indenting, cramping and dowelling was done from this platform. It is as comfortable to work from as a traditional scaffold, but on a structure such as this using a cradle saves the client a lot of money, and the quality of the work does not suffer.

The scaffold you can see was not built for man access. It is the suspension point for the cradle. 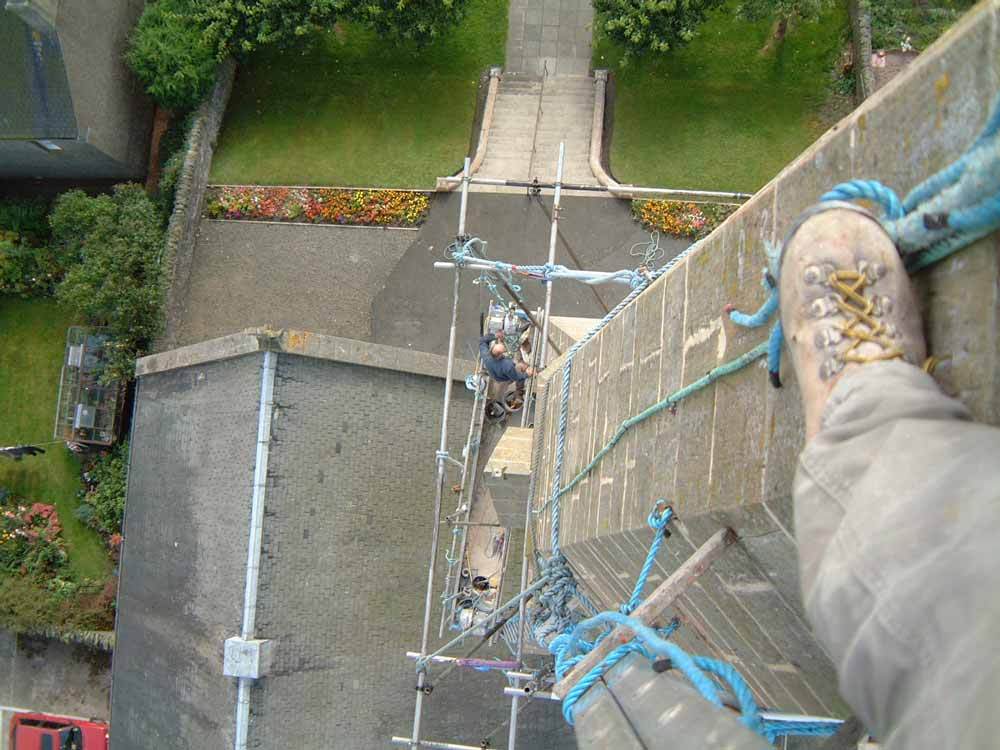 This picture shows the banker (the bench on which new stones are cut) from above. 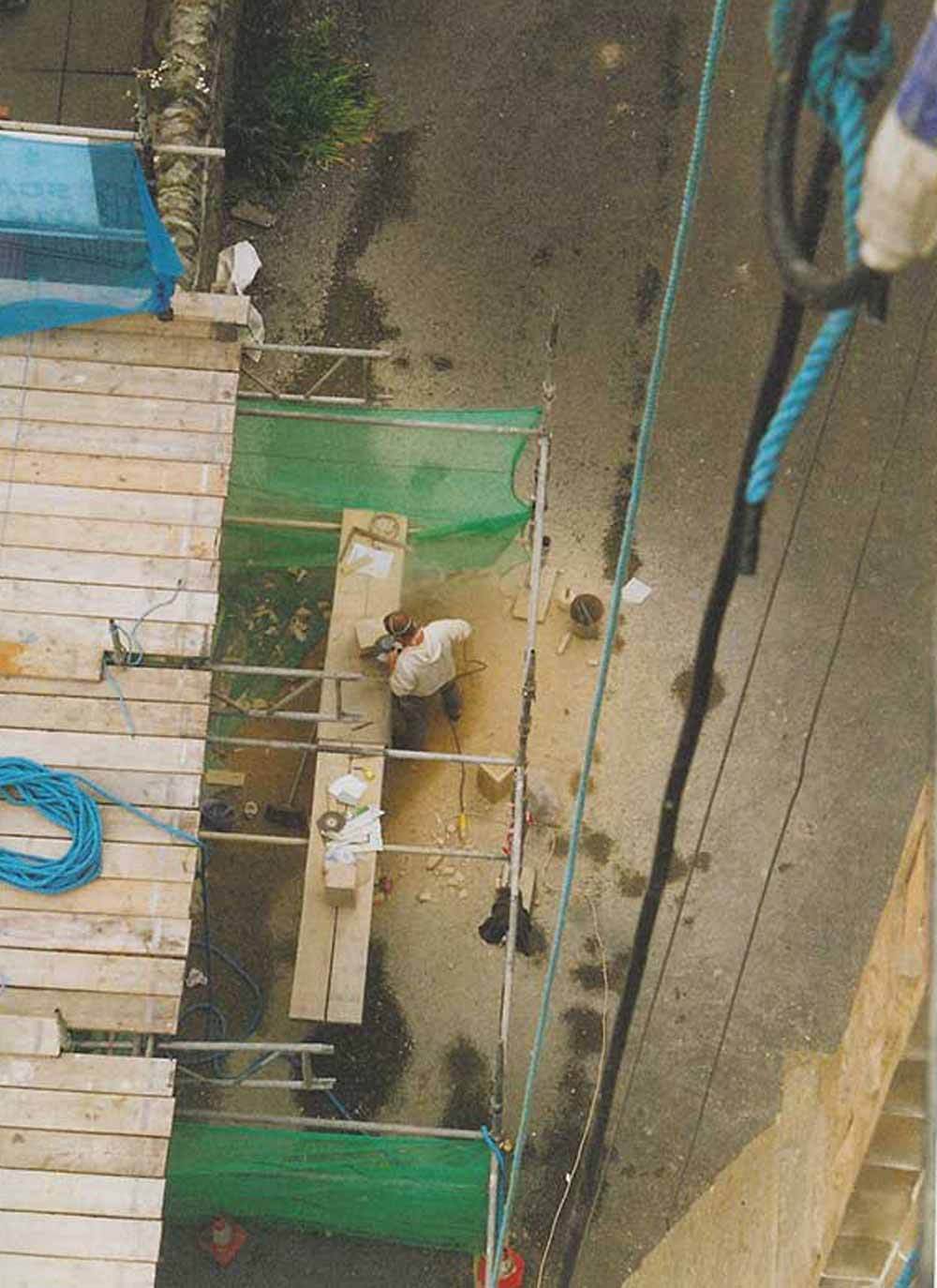 Cramps, such as the one seen on the right, join one stone to another very firmly.

This stone is also dowelled, for added security. 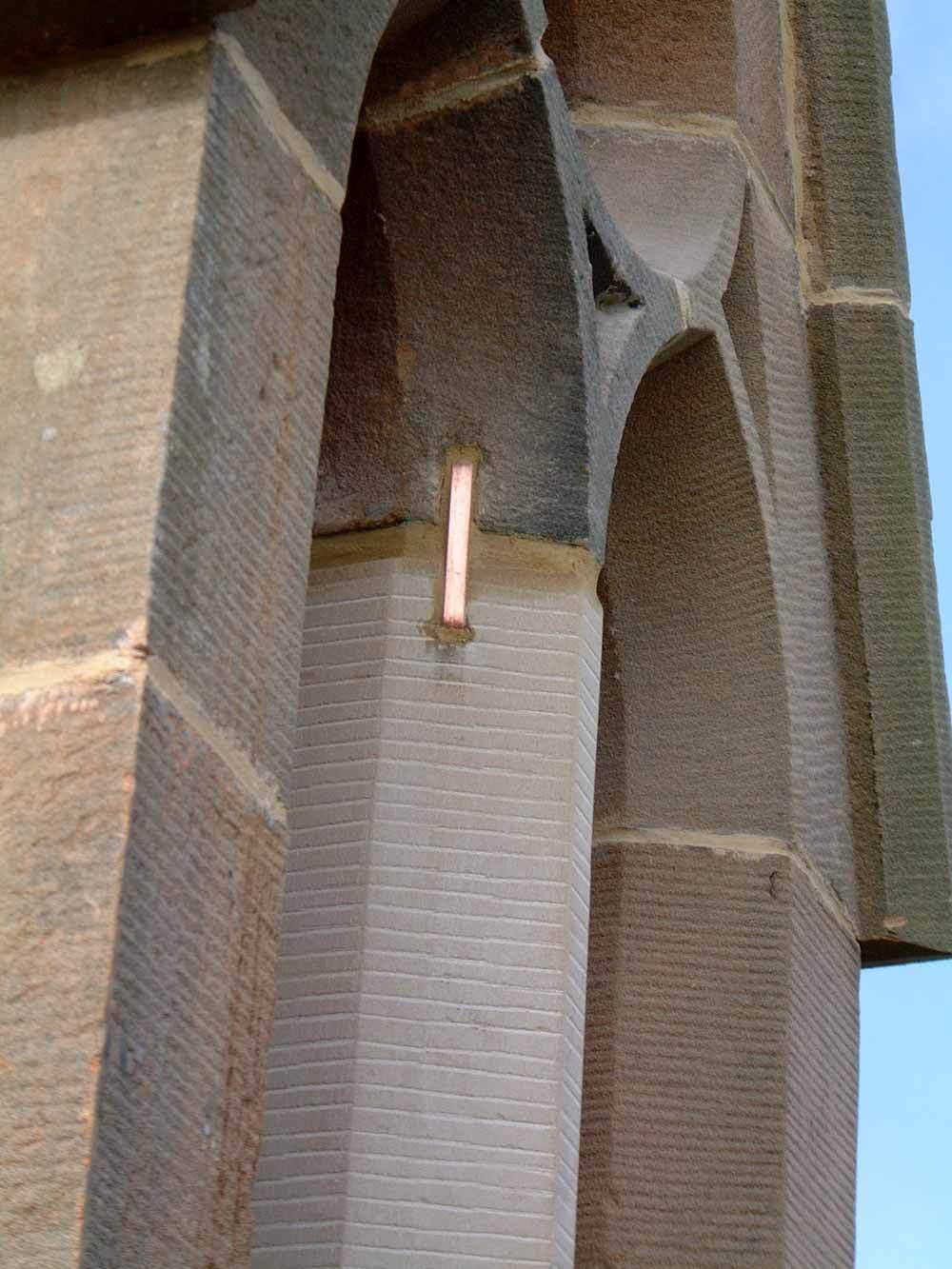 Drilling a hole in preparation for dowelling into the top of a mullion.

All dowels and cramps are secured with injected Hilti Hit resin (for masonry). 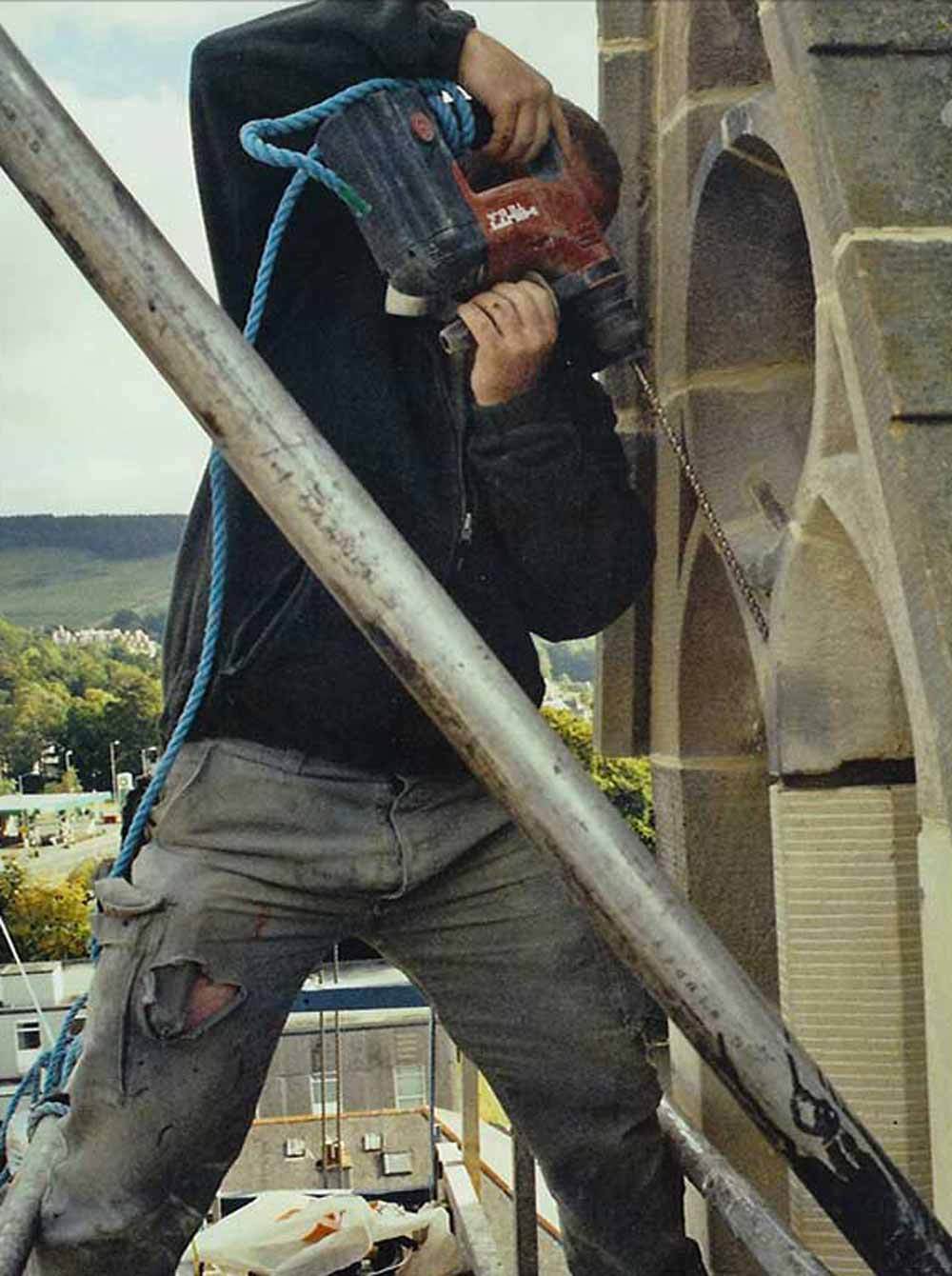 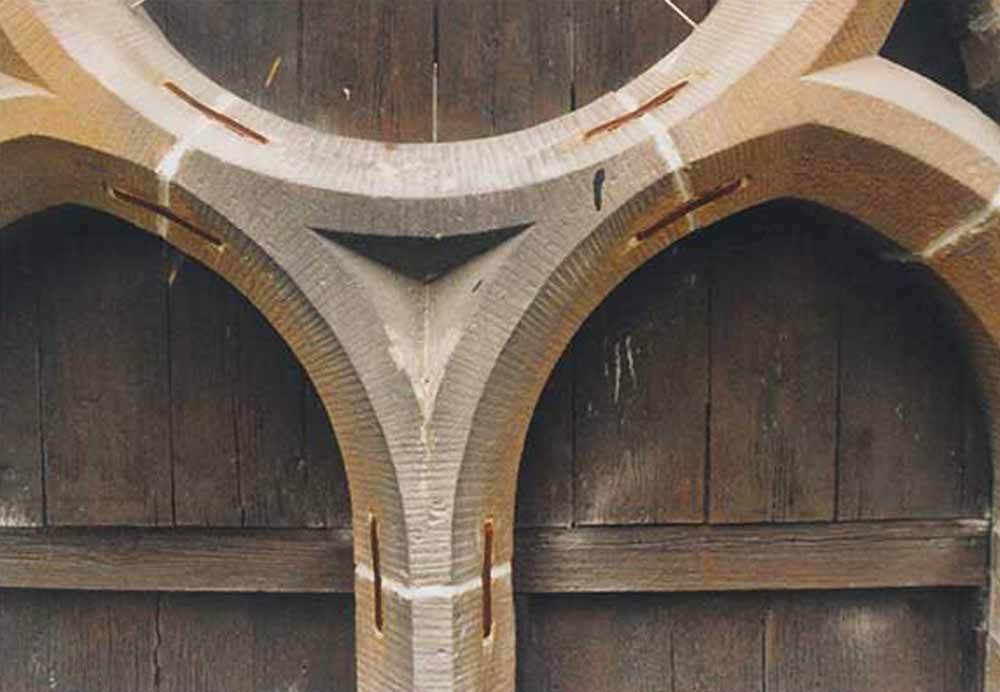 Another view of the cramps. This shot also shows the new lime putty pointing on the bell chamber window area. 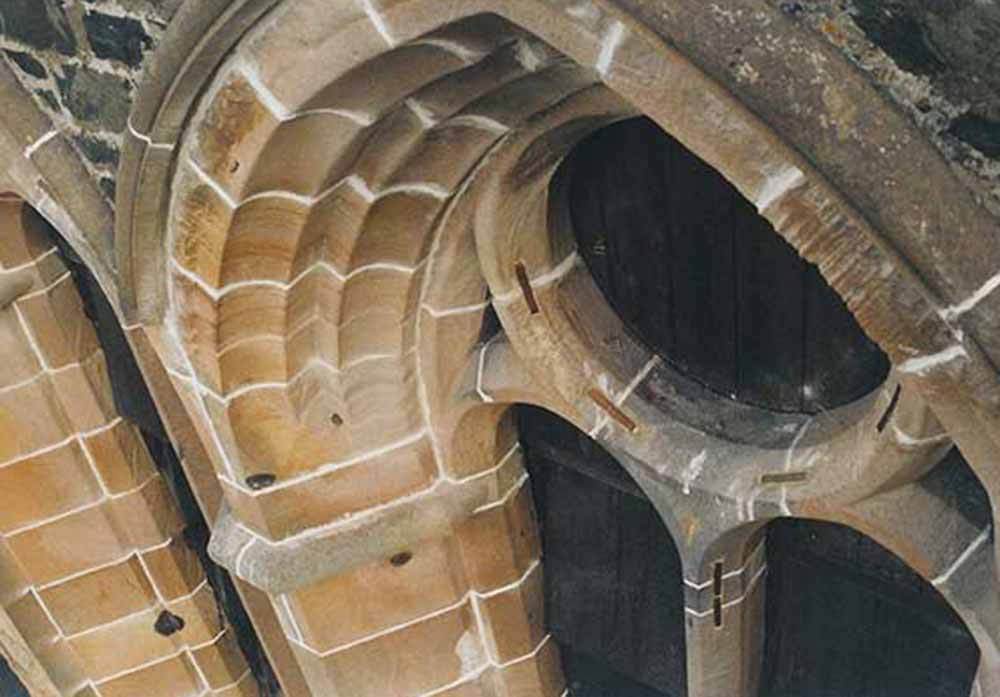 A general shot of the spire taken mid-way through the contract.

You can see here how the cradle is suspended from the scaffold above. 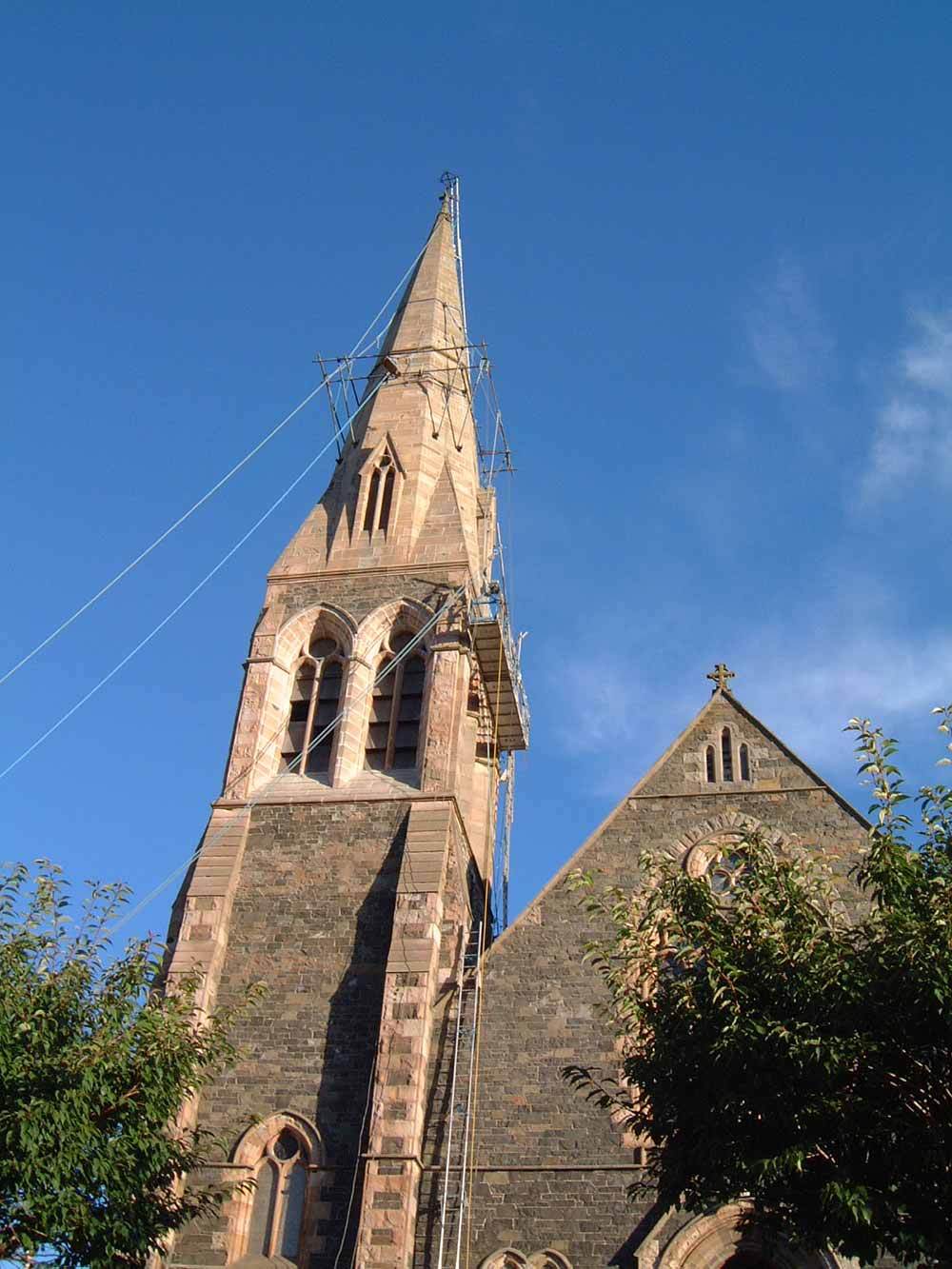